This week we are pleased to share a guest blog post by Peter Janzow, Senior Business Development Manager for Acclaim.

Microsoft has been in the news lately for the company’s initiative to recognize the training efforts of its sales force with digital badges. Recently Fast Company highlighted Microsoft’s efforts to become more involved in directly training its workforce through a series of Corporate MOOCs that it developed in partnership with INSEAD and Intrepid. To increase engagement and provide recognition to learners, Microsoft and INSEAD offer verifiable, digital badges – issued through Pearson’s digital badging platform, Acclaim – to participants who complete a robust series of requirements.

Microsoft’s sales force has embraced not only the online learning opportunity but also the digital badges they are issued. In the Fast Company article, Microsoft program manager Hilary Albert attributes that level of engagement to three main factors. "It’s a way for people to take part in a prestigious institution. It’s a way to differentiate yourself from other people that work here. And because it’s a co-branded badge, it has value outside of Microsoft," she says.” 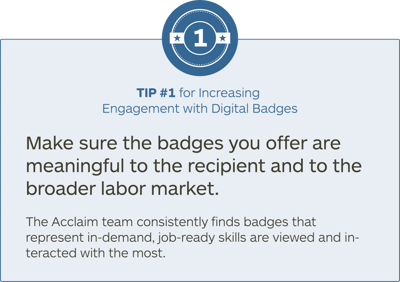 Another factor behind those high engagement levels could be explained in a recent white paper released by IBM’s Smarter Workforce Institute. In How do I recognize thee, let me count the ways, Dr. Haiyan Zhang presents evidence linking recognition from an employer to higher engagement among employees. For the purpose of this study, engagement is defined as the extent to which employees are motivated to contribute to an organization’s success.

Employee engagement levels can impact an organization in a variety of ways:

Zhang’s research finds that, not only does recognition increase an employee’s engagement, but multi-channel recognition drives even higher levels of recognition. Digital badges are not only the modern method for conferring recognition, but they’re any easy way to encourage multiple touchpoints of recognition – first from the employer, then from each social channel to which the badge is shared. 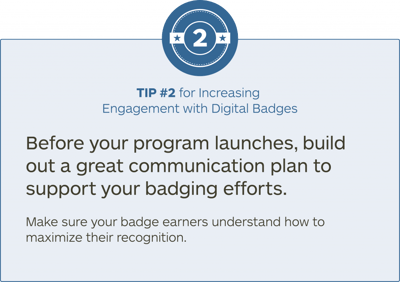 This connection between engagement rates and multi-channel recognition is proving itself out in real time, as demonstrated in badge earner sharing and engagement trends that Acclaim is seeing. The programs with the highest badge acceptance rates also correlate with highest levels of sharing.

That means for programs such as the Microsoft training courses, which report high course completion rates and certificate earning rates, badge earners are actively accepting and sharing their badges. Of learners who earn a Microsoft badge, almost 90% have claimed their badges. Those badges have been shared from Acclaim over 3,500 times to LinkedIn, Facebook, Twitter and other online destinations. On average, each badge shared is viewed 2.4 times, indicating a strong interest from others in the badge earner’s network who would like to learn more and verify the achievements represented by these badges. 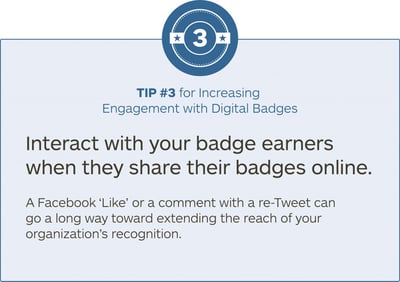 The bottom line? Badge sharing activity drives further recognition from an individual’s professional and social networks. And as the IBM researchers have pointed out, increased recognition drives increased engagement rates at work.

Peter Janzow is Sr. Director of Business Development in support of Acclaim, an enterprise class badging platform backed by Pearson. Peter has actively contributed to education for many years in roles that include executive management, global market development and entrepreneurship for educational publishing and technology companies. With a keen interest in STEM education, Peter continues to work actively in the fields of workforce development, professional credentialing, and engineering education. He is a former Director of the American Society for Engineering Education and has been with Pearson for a total of 18 years over the span of his career.

Previous
All Posts
Next